Inhalants are a difficult class of drugs to really describe or categorize. Just about any kind of chemical vapors can become an inhalant if a person wants to abuse it. While we might think of inhalants as a drug of choice for less-experienced drug addicts, the consequences of breathing in toxic fumes can be extremely dangerous and even lethal!

History and Prevalence of Inhalant Addiction 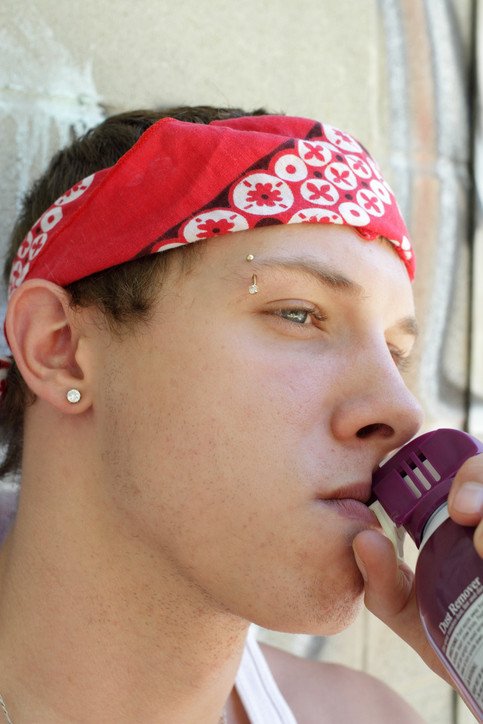 Inhaling or huffing fumes from chemicals is a practice that dates all the way back to ancient times. In the modern era, inhalant abuse began most notably in the 1800’s as nitrous oxide, ether, and chloroform gained popularity for their intoxicant properties. Today, solvent sniffing is a practice in which addicts abuse commercial products including paint thinners, nail polish removers, shoe polish, lighter fluid, spray paint, and just about anything else that can produce a sense of intoxication when inhaled1.

Inhalants are popular in certain groups and populations mainly due to their ease of access and low cost. Unlike most other addictive drugs, inhalants are most prevalent among those aged 12-17. Past year users in this age group are at a rate of 4.1%, higher than the rate of past year use among all other age groups combined. The reason for this is likely that teenagers have less access to harder illicit drugs or alcohol. Substances like nail polish remover or paint thinner can easily be acquired by just about anybody over the counter and abused2.

Inhalant abuse can be a very easy to detect addiction, particularly if the addict is a chronic user. Inhalant abusers may have paint on their faces, smell of whatever it is they were huffing, leave behind bags full of solvents, or rags saturated with paint thinner or gasoline. They may also be in possession of large amounts of compressed air cans or nitrous oxide canisters.

What makes detection difficult is often the fact that most abusers of inhalants are not heavy, chronic users. Most inhalant addicts are teenagers experimenting with intoxication who may leave little trace of their illicit behavior. Additionally, the list of substances which can be inhaled is incredibly long, which makes it difficult to pinpoint whether a person is using them for this purpose or not. For example, an ordinary teenager may have nail polish remover, whipped cream, or glue in their possession and not necessarily be using them for inhalant purposes.

When the person is actually intoxicated, they will frequently appear drunken. Slurred speech, disorientation, nausea, and dilated pupils are all symptoms of inhalant abuse. Additionally, many symptoms of inhalant abuse are extremely dangerous, depending upon the substance used to get high. If the person is inhaling dangerous chemicals, they are putting themselves at risk of unconsciousness, coma, and even death3.

While most drugs have a definite street cost, inhalants are in an entirely different class. Inhalants are not so much a singular drug, but a loose collection of substances which can produce intoxication when inhaled. As such, there is no real way to pinpoint how much an inhalant habit could cost a person, but it is usually extremely inexpensive. In fact, most people who abuse inhalants are teenagers or those living in extreme poverty, for whom inhalants are the only viable option in terms of substance abuse.

Inhalants also have no real verifiable link to crime. The high afforded by inhaling gases is typically short-lived and nearly incapacitating. People who are high on inhalants are usually extremely disoriented and giddy and there is no connection between this sort of intoxication and criminal behavior.

The main cost of inhalant abuse or huffing is strictly medical. When an addict is using inhalants, they are essentially replacing air in their lungs with chemicals which are, at best, useless, and, at worst, extremely dangerous. During the process of “huffing” the gases, the person is depriving the body of oxygen it needs and replacing it with dangerous chemicals. This can produce a wide variety of physical ailments, ranging from serious and immediate to mild and long-term4.

When evaluating the impact of inhaling substances, the question of which substance a person is abusing is vital. For a person who is inhaling nitrites, for example, they will suffer dilated blood vessels, increased heart rate, and a sensation of heat and excitement. They will appear flushed, get dizzy, and likely suffer headaches. Solvents like aerosol and other gases produce belligerence, apathy, impaired judgment and functioning, in addition to nausea and vomiting. In particularly high doses, users will also experience confusion and delirium.

Many people begin abusing inhalants as a cheap thrill or a way to achieve intoxication without spending a lot of money or going out of their way to acquire drugs. The problem is that many users report a strong urge to continue abusing the inhalants, particularly after going on a multi-day binge5.

Once a person has succumbed to this craving to continue using, they put themselves at risk for a wide array of serious medical issues. For one thing, inhalant abuse can lead directly to death via several mechanisms. Asphyxiation, suffocation, convulsions, seizures, coma, choking, and fatal injury (i.e. motor vehicle fatalities suffered under the influence) are all risks directly linked with inhalant abuse.

Long-term abusers are also at risk for widespread and long-lasting damage to the brain and nervous system. Frequent exposure to toxic chemicals can lead to neurological conditions which are similar, clinically, to diseases like multiple sclerosis. Other risks include damage to areas of brain responsible for cognition, movement, vision, and hearing. This cognitive damage can range from mild impairment to severe dementia.

Inhalants also damage the heart, lungs, liver, and kidneys. Some of this damage may be reversible if the abuser is removed from the substance, but in other cases, the damage may be persistent6.

Inhalant abuse is a relatively under-studied condition. While inhalant abuse is very common, with some studies ranking it the 9th most common substance abuse in the country, it is significantly less common than other addictive drugs. Additionally, most inhalant abuse occurs in teenagers who typically use inhalants as a “gateway drug” to other drugs. By the time these addicts arrive in recovery, they are typically no longer using inhalants at all.

As a result, there are few statistics regarding permanence and relapse among inhalant addicts. However, anecdotal evidence suggests that relapse on inhalants, particularly in a chronic user, is extremely likely. Given the ease with which an addict might acquire “huffable” substances, there is a strong indication that addicts should be supervised during the detox and withdrawal phase7.

While a full withdrawal episode from inhalant abuse is rare, it is still possible. When a person has abused inhalants for a particularly long period of time, their withdrawal episode typically resembles that of alcohol or benzodiazepines. As such, it requires a definite supervised, medical setting.

Symptoms of inhalant withdrawal can include sleep disturbance, irritability, jitters, profuse sweating, nausea, vomiting, elevated heart rate, and hallucinations. Depending upon the length of inhalant abuse, these withdrawal symptoms can persist for as long as one month after abstinence.

No medications have yet been found which aid in the recovery of inhalant withdrawal symptoms. In most cases, the symptoms, if they occur at all, will be short-lived and uncomfortable, at worst. In a medical setting, an addict may be prescribed medication which can help lower the heart rate, alleviate anxiety, and aid with sleep8.

Physical and Mental Difficulty of Recovery for Inhalant Addiction

The most difficult thing about inhalant recovery is the lack of widespread knowledge regarding the addiction. There are, as yet, no 12-step programs specifically addressing inhalant abuse and the recovery community, in general, is comparably uninformed regarding this addiction. As a result, most recovery protocols for inhalant abuse include a combination of recoverys including therapy, 12-step education, relapse prevention, cognitive behavioral therapy, and dialectical behavioral therapy.

Because inhalant abuse is so common among younger people, particularly teenagers, some of the most effective recoverys for them are programs specifically designed for troubled teenagers. Programs like therapeutic boarding schools and wilderness programs are especially effective solutions if the addict in question is between the ages of 12-17. These programs incorporate many of the above therapies in addition to teenager-specific programming including education and hands-on experiential programs9.

American Rehab Centers recommends Adult & Teen Challenge rehabs for recovery from inhalant addiction. Most other addiciton rehab programs are not able to give enough time and attention to the addict or are too costing for most people to afford over an extended period of time.

1Foundation for a Drug-Free World. “Inhalants: A Short History”. http://www.drugfreeworld.org/drugfacts/inhalants/a-short-history.html

5National Institute on Drug Abuse. “What are the short- and long-term effects of inhalant use?”. July 2012. https://www.drugabuse.gov/publications/research-reports/inhalants/what-are-short-long-term-effects-inhalant-use

6National Institute on Drug Abuse. “What are the other medical consequences of inhalant abuse?” July 2012. https://www.drugabuse.gov/publications/research-reports/inhalants/what-are-other-medical-consequences-inhalant-abuse

9CRC Health. “Inhalant Abuse – What It Is and Recovery”. http://www.crchealth.com/addiction/inhalant-abuse-recovery/

We can also help you in your search for other Christian schools, best rehabs, Christian drug abuse treatment centers, drug rehabs near me, drug rehabs or alcohol treatment centers. Finding the right alcohol and drug rehab is one of the most important decisions for an addict. It is important to understand everything you can about substance abuse recovery centers and drug recovery centers. Christian rehabs usually offer separate facilities for each gender. Insurance for addiction recovery forces drug addiction rehabs to complete their addiction recovery in 90 days or less, which usually doesn't work. Adult & Teen Challenge Centers are a long-term addiction recovery program and facility that is affordable, serving men and women from Florida, Georgia, North Carolina, South Carolina, Alabama, Kentucky, Arkansas, Oklahoma, Texas, Tennessee and Virginia.