Get the Most Affordable
Addiction Help Here! 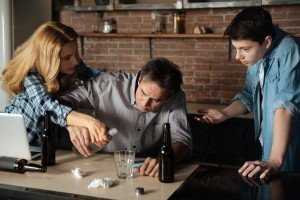 Alcohol is legal and inexpensive, making it the drug of choice for people from all walks of life. Unfortunately, it is also one of the most destructive and dangerous substances to which a person may become addicted. An alcoholic’s addiction can impact their family, friends and entire communities, endangering not only the life of the alcoholic themselves but everyone they come into contact with.

History and Prevalence of Alcoholism

Alcohol and alcoholism have been around ever since ancient people crushed grapes. Since its inception, alcohol has been present in every major civilization in one form or another. Today, 86.4% of U.S. adults report having consumed alcohol at least once in their lives, while 26.9% of adults report having engaged in binge drinking within the past monthi.

Historically, alcoholism has been more prevalent in men than in women. It has long been more socially acceptable for men to imbibe than women, particularly in the consistent daily amounts which would describe him as an “alcoholic.” However, in the past decade, social norms have shifted. As a result, heavy drinking is reported to have increased across all demographics by 17% and a great deal of that increase is attributed to heavier drinking by womenii. For instance, binge drinking has increased by 17.5% among women in the past decade, whereas it has increased by less than 5% among men.

Alcoholism is an addiction which tends to be relatively indiscriminate in regard to social groups and ethnicity; it is present across all demographics. That having been said, Asians tend to be alcoholic at a lower rate than other races, and women are slightly less likely to become alcoholics than men, but that is rapidly changing. Although alcoholism can be present in all social strata, there is a slightly higher rate of alcoholism among poorer populations than among the wealthy. Alcoholism has a genetic component as well. In families where alcoholism is present, offspring are far more likely to carry the alcoholic gene than in other families. Alcoholism, however, can also occur in individuals with no family history of the addiction. In this way, alcoholism can be very difficult to predict.

Today, alcoholism is the most common addiction in America. More than seven percent of the American population aged 18 and up have a drinking problem; this is nearly 13.8 million Americans, and 8.1 million of them are alcoholic.

Outward Symptoms of an Alcoholic

The first sign of alcoholism is usually drinking to excess, or binge drinking to the point of the drinker not knowing the next day what he or she did the evening before. Although binge drinking can occur in individuals not prone to addiction, this pattern of drinking (especially when it occurs when the individual is alone) is often a pre-cursor to full-blown alcoholism. In particular, alcoholics will tend to experience what is called a “black-out.” During a black-out, the alcoholic will continue to function and appear conscious, but will later be entirely unable to recall the episodeiii.

Another symptom to look out for is increased tolerance. As alcoholism progresses, the addict will require more and more alcohol in order to achieve the same effect. As the alcoholic builds a tolerance, they will typically begin to drink more frequently and begin earlier in the day. Drinking alcohol early in the day is a common symptom of alcoholism. Similarly, alcoholics will become noticeably agitated if for some reason they are unable to acquire or ingest alcohol when they feel the need, which will become more and more frequent.

Alcohol has a number of obvious physical symptoms as well. A person who has been drinking heavily for an extended period will usually be suffering from dehydration. This can lead to bloodshot eyes, puffiness in the face, and bloating, particularly in the belly. In extreme cases, liver damage will also begin, which can result in a yellowing of the skin. Alcoholics may also shake slightly, particularly in the hands.

Behaviorally, although alcohol is a depressant, it can also masquerade as a stimulant. What this means is that an alcoholic may appear almost manic-depressive at times, going from highly elevated moods to deeply depressed in a short stretch of time. This leads to alcoholics being extremely unpredictable, experiencing bouts of rage and suicidal episodes all on the same day.

The Typical Cost to the Addict

As far as addictions go, alcoholism is one of the cheapest addictions to maintain. An alcoholic can typically acquire their daily supply of alcohol (usually a high proof substance like Vodka) for around $20. Although alcoholics frequently engage in illegal behavior, funding their addiction is not primarily the motive. Rather, the reduced inhibition caused by alcohol can lead them to do things they wouldn’t do sober.

The greater cost for alcoholics, is usually in terms of legal and medical issues, as well as the impact on their occupation and relationships. It is highly likely that a person suffering from alcoholism will get at least one DUI in their time, with all the related legal and alternate transportation expenses. Additionally, many alcoholics will run afoul of the law in other ways, such as fighting, public drunkenness, petty thefts, or various types of lewd behavior. Others will bear the cost of damage to their vehicle or themselves.

Medical issues can begin to mount fairly early for alcoholics, as well. After a relatively brief period of daily consumption, alcoholics will no longer be able to safely quit using. Quitting or stopping the intake of alcohol “cold turkey” can be a very dangerous, leading to seizures and even death. Hospitalization is typically required if an alcoholic cannot continue their daily dose of alcohol. In the long-term, damage to internal organs becomes a risk and alcoholics can suffer from pancreatitis, cirrhosis, jaundice, and even wet brain, to name just a few.

Effect on the Addict

Alcohol is processed primarily by the liver. As a result, most physical damage occurs there, leading to a range of complications. For alcoholics in early stages of their addiction, they may present abnormally high levels of liver enzymes and other mild liver damage, but most of this is reversible if the progression is caught early enough. Later on, alcoholics run a high risk of cirrhosis, which can be fatal. They can also suffer damage to their kidneys or pancreas, resulting in further complications.

The action of alcohol on the brain impacts primarily its pleasure centers and the ability to make decisions. As time goes on, an alcoholic’s brain will produce fewer endorphins on its own, requiring alcohol in order to allow the alcoholic to “feel good.” This can lead to depression and bipolar mental disorders. Heavy users will also suffer from moderate impairment of intellectual functioning in regards to problem-solving abilities and critical thinkingiv. Most of these changes are, however, short-term, and will reverse themselves if the alcoholic is removed from the influence of the substance. In rare cases, an alcoholic may develop Wernicke Korsakoff Syndrome, or something called “wet brain”. In these cases, alcohol has so damaged the brain that the addict will never completely recover.

Permanence and Relapse of Alcoholism

Most recovered alcoholics will never again be able to safely consume alcohol in any capacity without going into a full remission. As a result of this and the ease of access to alcohol, there is a very high risk of relapse among alcoholics, especially if their drinking is the result of covering up inner turmoils. The National Institute on Alcohol Abuse and Alcoholism puts the relapse rate at about 90% after 4 yearsv. It is common for alcoholics to believe themselves “cured” after a period of abstinence and think they can drink moderately again, only to find themselves once more fully addicted.

As a result, the only recoverys which have been indicated to work for alcoholics have included total abstinence, usually partnered with a program of action which allows for a complete psychological, emotional and spiritual change, like Adult programs.

Detox Comes First, But It Can Be Dangerous

Alcohol is the among the most dangerous drugs (along with benzodiazepines) from which to detox. Withdrawal symptoms are severe and can take effect within just a few hours of an alcoholic being separated from alcohol. Symptoms of alcohol withdrawal begin with depression, violent tremors (also known as the delirium tremens), and nausea. Depending upon how long the alcoholic was drinking, symptoms can progress to visual and auditory hallucinations, an itching or burning sensation in the skin, painful joints, and, ultimately, grand mal seizuresvi. If an alcoholic is allowed to detox without supervision or medical care, this process can result in death.

As a result of the extreme discomfort and danger inherent in withdrawing from alcohol, it is always recommended that an alcoholic is placed in professional medical care for detoxification. A typical detox period lasts for 3-7 days. In a medical setting, mild doses of benzodiazepines like Ativan are commonly prescribed in order to lessen symptoms of withdrawal and prevent seizures.

Physical and Mental Difficulty of Recovery

Recovering from alcoholism is a long and difficult process. It does not happen is a few days or even a few weeks. Post-acute Withdrawal Syndrome can last for up to 6 months, during which time the alcoholic may still experience foggy cognitive functions, depressed mood, and frequent urges to drink. During this period, the alcoholic will rarely have the ability to recover from their addiction. If an alcoholic is placed into the care of a year-long program where they are kept from drugs and alcohol for that entire period, there is a much greater chance of a lasting recovery. This especially so since he or she will be surrounded by a compassionate fellowship of like-minded people. The mentoring of peers who have been in the program longer, as well as seeing new how bad the new intakes look when they arrive, are key factors in recovery.

Programs like Adult & Teen Challenge (the largest group of rehabs in the country) offer a long-term program with all the right elements to help addicts get past their addiction. They combine proven recovery tools and peer mentoring with a strong focus on the spiritual element. Their experience has shown that addicted individuals tend to have a void in their lives, and that void can be filled by a focus on the individual’s spiritual side. Their recovery rate and lack of relapse of their clients are second to none in the industry.

Another factor to consider in the recovery of alcoholics is the omnipresence of alcohol and drinking establishments. Because the substance is legal, it is typically wise that the alcoholic be placed into the care of a recovery facility which can shield him from alcohol until such time as a defense has been built up against the urge to drink.

iii National Institute of Health. “What are symptoms of an alcohol use disorder?”. https://www.rethinkingdrinking.niaaa.nih.gov/How-much-is-too-much/Whats-the-harm/What-Are-Symptoms-Of-An-Alcohol-Use-Disorder.aspx

Alcoholism -- It's History, Impact and Solution

Alcoholism is the most common addiction, affecting 8.1 million Americans. Learn symptoms and solutions to alcoholism.

FLORIDA RESIDENTS: Please note that Adult & Teen Challenge Centers in Florida are nonprofit religious institutions, not licensed medical facilities, nor do they accept insurance. Outcomes indicated are based on multiple outcomes studies, including this study.Let us know if you need help with affordable rehabs for alcoholics , Christian addiction treatment programs, Christian holistic addiction treatment or addiction treatment centers.